The Long and Winding Road to the Emergency Room - NYTimes.com

He was the first patient of the day, dropped off at the emergency room by the police or a family member — a man in his 50s, unshaved, stumbling, engulfed in the pungent aroma of alcohol. 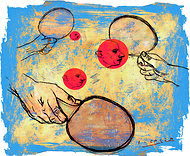 When he blew into the breathalyzer’s strawlike tube, the readout was 0.18, more than twice the legal limit.

“I get seizures,” he said, referring to the dangerous reaction some people experience when they abruptly stop drinking. Then, as if to prove it, he held out trembling hands. Each bore the nicks and scars of a hard-lived life.

I looked at the beads of sweat on his brow, then down at his vital signs. Heart rate 120; blood pressure pushing 170/90. Despite his high alcohol level he was already in withdrawal. A medical detoxification — with drugs to counteract the sudden absence of alcohol in his system — was the right first step.

“Let’s admit him,” I said to his nurse. Because it was still early, there was a good chance a hospital bed would be available.

Her reply was apologetic but resigned: “He’s out of network.” I winced at my own naïveté. “Out of network,” a euphemism for “insurance will not pay,” was a roadblock I should have anticipated. A nuisance for many patients and would-be providers, it is ubiquitous in the second-class world of substance-abuse treatment, where insurance companies contract with selected hospitals and doctors to deliver care at bargain rates.

We called the few in-network hospitals within a broad radius. One had a bed. But before accepting my patient, the receiving doctor wanted a battery of tests, including an electrocardiogram and laboratory work, to rule out other medical concerns. It would be a day or so before the tests came back.

But the patient was already in withdrawal, I told the doctor. He couldn’t wait a day.

To read the complete article click on the above link:
--