by Scott Hensley and Richard Knox

Listen to the Story 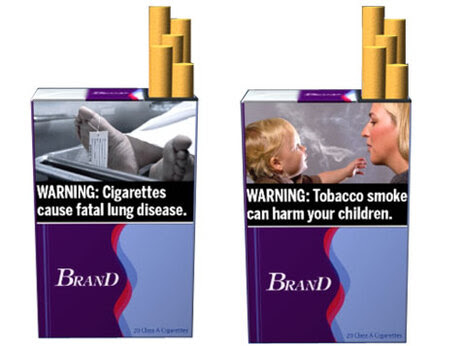 Now that the Food and Drug Administration has broad powers to regulate tobacco, it's starting to flex its muscles.

Today, the agency unveiled a proposal that would add large, dramatic warnings to cigarette packages and advertisements in a move to discourage people from smoking.

The Tobacco Control Act requires the FDA to come up with regulations for tougher labeling of cigarettes. Now you can see the agencies' ideas and comment on them through early January. Final regulations are due next June. Tobacco companies will have until September, 2012, to make the changes.

Under the law, these warnings will have to appear on both the front and back of cigarette packs, taking up half the real estate on each side of the label.

In big ads, they're supposed to occupy at least 20 percent of the space. For smaller ads, there will be alternative anti-smoking messages with bright logos.

Will they work? Some research shows that bold graphic warnings do a better job than text alone in communicating risks and affecting behavior. Other countries, such as Canada, have blazed this trail already.

As NPR's Richard Knox reports on All Things Considered, David Sweanor, a law professor at the University of Ottawa, says Canada's decade-old warnings do work — up to a point.

"What we see with these sorts of warnings is that it does increase motivation," Sweanor says. "People are more aware of the risks. They are wanting to quit. But that has to be combined with services that make it more likely."

Sweanor says smoking hasn't gone down as much as Canada as they'd hoped because the government hasn't provided enough access to smoking cessation programs.

The U.S. government's new campaign, powered by a new 2009 tobacco control law, does include more coverage of quit-smoking programs through Medicare, Medicaid and private insurance. But some wonder if the funding will materialize.

Others say the scare tactics can sometimes backfire. One study that tested warnings on a bunch of smokers, who happened to be psychology students, found that when smoking was a big part of someone's self-esteem, they weren't deterred by warnings that cigarettes could kill them. In fact, paradoxically, the death warnings might make them want to smoke more.

For those people, the researchers say, it might be more effective to dent that self-esteem with messages that say things like "Smoking makes you unattractive."

Almost two decades ago, comedian (and smoker) Denis Leary poked fun at smokers' ability to ignore warnings in a scathing, very unscientific and yet on-the-mark bit:

But the FDA is betting big that scare tactics will work on some of the 47 million Americans who still smoke – and deter more teenagers from starting. Smoking prevalence has stalled at 20 percent of adults – and, ominously, about the same proportion of high school seniors.

Tobacco companies didn't have much to say about the new warning labels – although a spokesman for R.J. Reynolds notes that the company has already filed a suit challenging the constitionality of the warning label requirements, on First Amendment grounds.

@whoam(Inow): Of course smoke from cars bother me, too. But not only is that NOT the topic here, the analogy actually makes my point. We have limits on what can come out of the back of a car. That has allowed us to come a long way in cleaning up the air in many parts of the world. At least we did "regulate" that and it worked, albeit to varying degrees. Here, doing nothing is the worst alternative.

People will carry the cig pack in a holder of some type where the pictures will not be visible. This type of packaging will stop people from smoking.

Once the smoker is hooked there is little need to warn of the health risks. Anyone who awakens and hacks for 15 minutes, or who gets short of breath walking down the driveway to the mailbox, knows that cigarettes are slowly killing him. But it is up and coming smokers who might be disuaded by graphic warnings. I was once leaving a party and a young woman lit up. Her friend was dismayed and said, "Don't you know those things give you cancer?" The woman replied, "Yeah, but that stuff comes on slowly."
Parents (smokers or not) do whatever it takes to keep your kids from becoming fodder for tobacco profits.

@Amphitere of course there are some who don't know smoking is bad for their health, but the vast majority in the US do know and assume they will quit before it gets the better of them. For that matter, most people many not be aware that it isn't just lung cancer that afflicts smokers but also esophageal cancer, pancreatic cancer and not to mention 100s of other diseases more prevalent amongst smokers, or the fiscal impact it imparts on our healthcare system, but sadly even that knowledge and understanding won't speak as loudly as tobacco addiction. Quitting is hard, most people DON'T appreciate that. These labels aren't going to make a big impact, no more than the current written warnings or advertisement warnings or campaigns that flood the TVs and schools about the health impact of smoking. Public policy that gets at the heart of smoking convenience DOES make a difference, increasing the tax on tobacco products, making it illegal to smoke indoors, on patios and on the beach or near schools, for example, that makes a difference, albeit most smokers hate it and say they have the right to do whatever they want to their bodies, which is true to some extent, unless they ave kids or harm others with their second hand smoke.

Hard to imagine, but as a former smoker I can tell you that one does not need the FDA or anyone to tell you that smoking is bad for you, and no smoker would have believed that it wasn't harmful despite the industry's claims (as if stanley tools could tell me hitting myself on the head with a hammer was harmless and they'd somehow be culpable for me splitting my skull). Graphic pictures on packs is going to do nothing whatsoever.

PS as a smoker I am fine about the warnings. the stuff is way addictive. more so than opium according to the docs.

"Just today as I was walking down the street the man in front of me a couple of paces was smoking and I couldn't get out of the way without breathing in what came out of his lungs!"

lol but the cars didn't bother you?